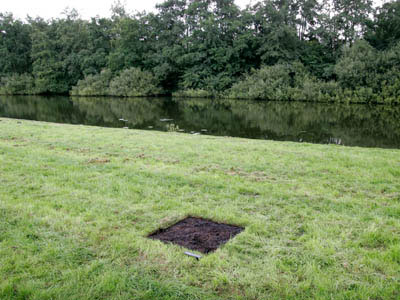 Aftermath of Obliteration of Eternity, 2009

Here is a nice write up of Joe’s work:

Penrod certainly isn’t the first artist to try to preserve shadows — one might argue that the history of photography has been one long inquiry into the preservation of shadows — but I love the playfulness of the bright blue tape, and the whimsy involved in trying to finish the taping and photographing before the shadow has moved. The movement of the shadows enables some of my favorite pieces, like this one on a Williamsburg street corner:

The Swarm Gallery exhibition, at 560 2nd Street near Jack London Square, will last from February 20th to March 29th. Among the many objects whose shadows Penrod has tried to snare are orange traffic cones, and his Swarm installation will involve traffic cones as well. You can also find more work on Penrod’s blog or his Flickr portfolio (there’s more than just the tape outlines, even though that’s all I’ve mentioned here.) Good stuff, I think, and I definitely plan to check it out in person when the show opens.